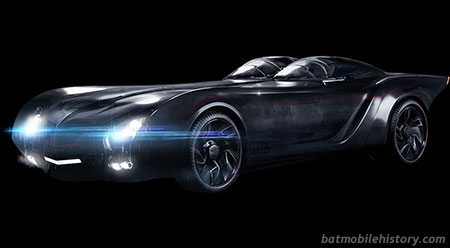 After decades of comic and animated appearances, the Teen Titans finally made their live action debut in the web series Titans. As is often the case with the Titans, Batman is more of a presence than a character, with various glimpses and Easter eggs the closest we get to an on-screen appearance. The Batmobile made its first appearance in the November 16th episode "Jason Todd," and has been spotted several times since then. While these shadowy glimpses were all we saw on screen, Titans concept artist John Gallagher posted the above image to his Instagram account in January 2019. The design is equal parts classic TV and animated series, with a smooth contoured design topped by twin canopies and accented with a thin red line down the side of the car.