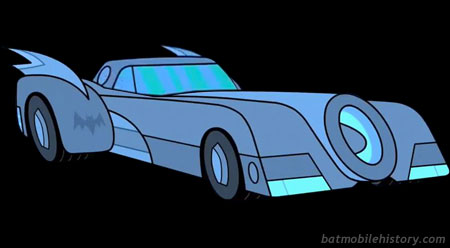 Teen Titans Go! was a spinoff of the popular Teen Titans series, but with shorter stand-alone episodes that featured a lighthearted take on day-to-day events in the lives of the Titans. The episode "Sidekick," for example, had Robin travel back to Gotham City to Cave-sit while Batman was away. The other Titans tagged along, and couldn't resist playing with the myriad gadgets housed in the Cave.

Among them was this Batmobile, which the Titans used to respond to a Crime Alert triggered by the H.I.V.E. Five. The design was strongly based on Anton Furst's Batmobile, and was one of the many references to Batman's history scattered throughout the episode. Although the Titans were ultimately victorious, the Batmobile (along with most of the other items they "borrowed") was severely damaged. Unwilling to admit his shortcomings to Batman, Robin came up with a suitable scapegoat to explain its condition: 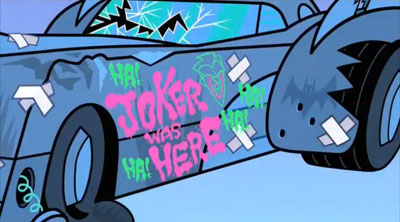