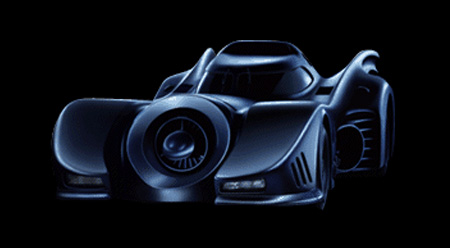 In the summer of 1989, Batman came to the big screen for the first time since 1966. Thanks to the work of comic artists like Frank Miller, the public was ready for a new, darker take on the caped crusader. Warner Brothers had Tim Burton bring his unique style to the movie, with Anton Furst as production designer and Julian Caldow as concept illustrator for the Batmobile. The team created a car unlike any previous incarnation, a combination of brute force and classic design aesthetics. To build the car, the production team spliced together two Impala chassis, and the car was powered by a Chevy V8. The body was a custom-built fabrication, and the whole thing rides on a set of Mickey Thompson racing tires on custom wheels.

In his design, Caldow managed to capture the essence of a Batmobile while providing all-new design elements. The bat-mask was gone entirely from his design. In its place, the nose featured a large jet turbine intake flanked by sweeping, mandible-like front fenders. Cold air intakes for the afterburner were mounted ahead of the rear fenders. The rear of the car had a rounded, heavy look that was influenced by cars of the 1930s, set between a pair of relatively short sculpted fins. Inside, the two-seat cockpit featured aircraft-like instrumentation, a passengers' side monitor, self-diagnostics system, CD recorder, and voice-command recognition system.

Gadgets on this Batmobile were relatively simple, but potent. It was armed with spherical bombs, a pair of forward-facing Browning machine guns, side-mounted disc launchers, and chassis-mounted shinbreakers. For quick maneuvers, the Batmobile had side-mounted grappling hook launchers and a central "foot" capable of lifting the car and rotating it 180°. In addition to its armor plated body, the car could envelop itself in a heavy armor cocoon. To avoid capture, the Batmobile also featured three primary pursuit deterrents: oil slick dispensers, smoke emitters, and, in extereme circumstances, a "Batmissile" mode that sheds all material outside of the central fuselage and reconfigures the wheels and axles to fit through narrow openings. Once employed, however, the Batmissle mode essentially destroys much of the car, and it must be rebuilt afterwards.

The car was retired after Batman Returns, though its popularity with fans has established a strong following. It has been used as a basis for several comic book cars, as inspiration for the Batman: The Animated Series car, served as a spokesmodel for OnStar in 1999, and easily ranks with the 1966 car as one of the most popular Batmobiles of all time.