Legends of the
Dark Knight #42 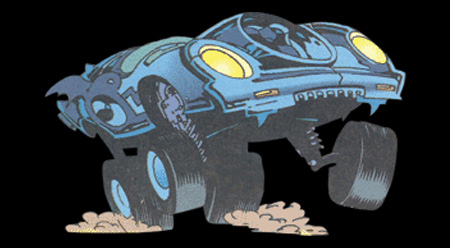 When a suspicious suicide points to Poison Ivy, Batman starts investigating. The trail leads to a new designer drug, and this Batmobile acts as Batman's "backup" when it's time to make an arrest. Crashing through a warehouse wall, it drives the suspects to a waiting Batman via remote control. Batman also has an internal monologue about it:

"Sociologists complain we live in an automotively obsessed culture—that a man reveals his character by his car. Guilty as charged. The car was the best money could buy, utilizing top engineers and designers...but I did my own modifications. Took time to work out the bugs. But my favorite option speaks for itself... [Stop!] ...voice-activated remote control!"