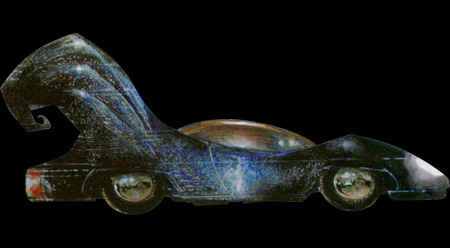 Sam Kieth brings his unique style back to Gotham City in Batman Confidential "Ghosts," with a modified version of his Batmobile appearing in the second issue of the story. First seen in 2006's Batman: Secrets and then in 2007's Batman/Lobo: Deadly Serious, the design retains the same wide body, flat bubble dome, and "liquid metal" finish. The fins are again the biggest difference, more like extensions of batman's cape instead of the wings or simple fins of previous designs.