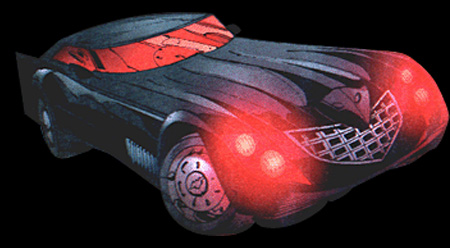 Batman RIP started off with Batman taking some "down time" after his death and revival at the hands of the third Batman. So he and Robin took the new Batmobile out for a test drive only to encounter a doped-up carjacker in a Lincoln Navigator who had visions of being the next supervillain. Although Batman expesses some reservations about the way the car turned out, it easily performs it's duties and the criminal is quickly captured. Not that Batman had any doubts - he notes that "even the CD changer's ten times smarter than the moron driving the Lincoln."

It appeared again in Robin #179-180, when Robin needed to go out solo after Batman's disappearance. Several more features of the Batmobile were displayed in these issues, including heavy armor plating, an electrical deterrent built into the Batmobile's skin, a complete video scanner suite, a set of four retractable six-barrel miniguns (one mounted above each wheel), an ejection seat, low-grade fear gas bombs, limited artifical intelligence, and "Steroid Mode": a four-wheel-drive option that includes larger treaded tires and raised suspension components.

Its most recent appearance was in Gotham City Sirens #16, acting as transportation for Batman (Dick) and Robin (Damian) while away from Gotham.