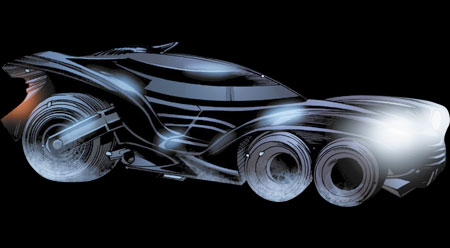 The much anticipated entrance of Batman into the Smallville universe finally came in "Detective," the second story arc of the comic-based Season 11. In this universe, Barbara Gordon is Nightwing and Batman has a full face mask, but his attitude and gadgets remain familiar. The first we see is the "Hoverbat," a winged vehicle similar to the live-action Batwings. But in chapter 20, after a bad confrontation with Prankster and Mr. Freeze, the surrounding area is too hot to for the Hoverbat and so Batman requests "The Car."

Heavily armored and equipped with a powerful engine, the Batmobile has no problem breaking through a police barricade or the side of a building to get to Batman and the injured Superman. It featured remote and autonomous driving capabilities, as well as voice-command recognition. The design is unique, though it borrows the outrigger suspension from the Tumbler (though here moved to the rear wheels) and the three-axle chassis first seen in Child of Dreams.