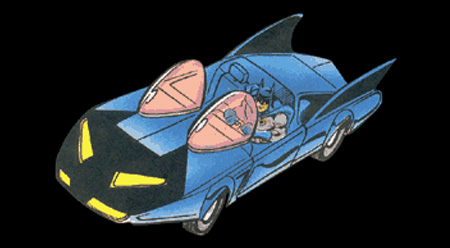 The last of the Futura-styled Batmobiles finally retired in 1978 when the Superfriends cartoon was revised into Challenge of the Superfriends. Street cars of the late 1970s - early 1980s had developed a more aerodynamic hard-edged style, and the Batmobile followed this concept with a smaller roadster with a sloped nose and flying buttress B-pillars. The design was quickly picked up by the Batman comics, and became one of the more enduring designs.

The Bat mask was retained for this car, though like the 1971 Batmobile it was little more that a flat hood decoration. Futura Batmobile styling wasn't completely gone, however, and showed up in the low horizontal fins and twin bubble windshields, as well as the now-familiar blue color.