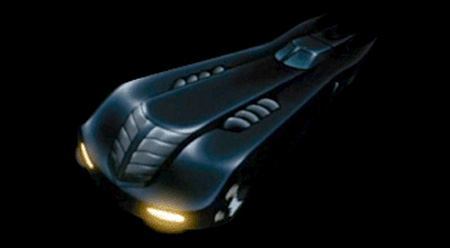 The same year that the second Batman movie was released, a new television series began. Batman: The Animated Series followed the "Dark Knight" style of Batman, with gothic scenery, dramatic plots, and dark characters. No specific time period was given for B:TAS, but it combined designs from pre World War II New York City with modern components like jet propulsion and computers.

The Batmobile created for the series was drawn with the same concept. It combined elements from the movies and comics, and was designed with square lines, long fins, and a blunt nose with a slatted grill. As this was an animated car, and engineering concepts did not have to be taken into account, this Batmobile had numerous gadgets that would not fit into a real car. Among these features were smoke and oil dispensers, wheel slasher hubs, a missile rack, tear gas dispensers, ejection seats, titanium alloy wheels and body panels, and reversable jet exhausts. It also had a "shield" mode to prevent people from tampering when the car when it was left unattended, though it was not as overt as the "cocoon" used on the 1989 Batmobile. Despite the obvious presence of the jet exhaust, the show frequently used sound effects from a reciprocating engine for the Batmobile's driving scenes. This, plus direct views of the engine (as seen in the episode The Mechanic), suggest that the car uses a large piston engine for primary power, and an auxillary jet for high-speed accelleration.

This design was used through 1995, when the series was finished. The show would, however, return as the revised The New Adventures of Batman starting in 1997.