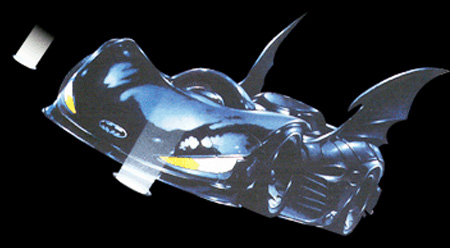 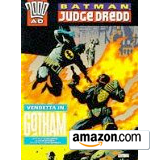 After their first team-up, Batman and Judge Dredd ran into each other a few more times in the years that followed. The next crossover was titled Vendetta in Gotham, when it seems that Dredd has returned to Gotham to settle the score after Batman got away free after their previous encounter (the fight was actually a delay tactic, as Mega City psychics had claimed that Batman was going to be killed that night unless he was prevented from doing his job). Dredd meets up with Batman on the road, and disables this Batmobile with a few shots from his Lawmaster.

Having taken extensive damage at that point, the Batmobile is essentially retired for the time being. The next Dredd/Batman crossover, The Ultimate Riddle, used no Batmobile at all. It looked like the following story, Die Laughing, was going to be the same way - until this Batmobile reappeared in a view of the cave on the second-to-last page of the second book. Although drawn by two different artists (Cam Kennedy in Vendetta and Jim Murray in Die Laughing), they both use the same design to provide a nice bit of continuity.

The car itself is rooted in the 1989 Batmobile, and sports many of the same design elements as the movie car. There are quite a few differences as well: the intake has been moved to a hood scoop, the front fascia is a smooth panel, and the headlights and fins have been reworked. Despite its multiple appearances, this Batmobile was used for little more than set dressing.