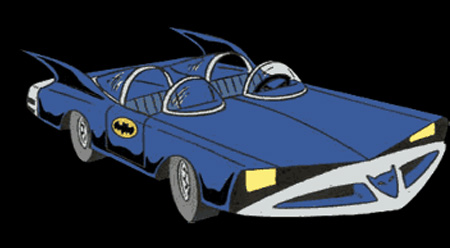 In 1973, Batman returned to television with the debut of the Superfriends cartoon series. Teamed with Superman, Aquaman, Wonder Woman, and "hero trainees" Wendy, Marvin, and Wonder Dog, the hour-long show had the heros facing danger around the world. The character roster evolved as the show went on, but Batman & Robin were always part of the cast.

The Batmobile created for the original Superfriends was based on the Futura Batmobile, but the lines of the car were modified substaintially for use in animation. The most obvious change was to the nose of the car, where the hood received a "V" depression that echoed the lower fascia. This was also the first car to feature the yellow bat emblems on the doors, though it is a feature that was quickly picked up in the comics as well.