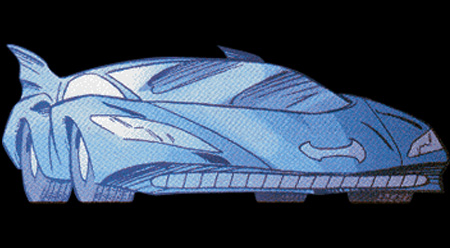 In December 2003, a miniseries titled Batman: City of Light began its eight-issue run. In it, Batman suffered a crisis of faith when an innocent life was caught in the crossfire of his war on crime. Though much of his time is spent off-duty, the Batmobile still made several appearances (primarily as basic transportation). The design follows the typical "Batmobile" motif of a high-performance car with fins & such, but it lacks the usual jet or rocket system—relying solely on a traditional reciprocating engine for power. The rear of the car does offer generous trunk space, allowing Batman a place to store his gear while on the road.

The car does not last beyond this mini-series, however, and is consumed by a living building in the final issue.