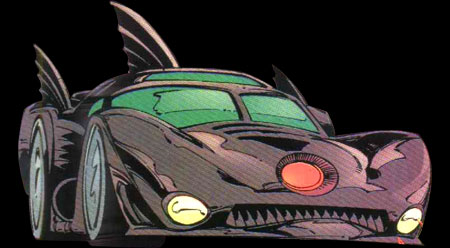 After chasing Epoch - the self-proclaimed "master of time" - through time, the Justice League end up in the "Wildstorm Universe." The JLA and WildC.A.T.S. eventually team up to stop Epoch, and this Batmobile first appears in the splash panel featuring the combined team going into battle.

It appears on several subsequent pages as well, though no special abilities are shown. The design appears to be a combination of the Batman and Batman Forever cars, with the central intake, side scoops, and window arrangement of the former mixed with the fin arrangement of the latter.