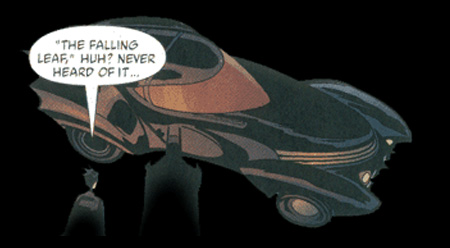 By April 2004, Cassandra Cain had been "fired" by Batman. After seeing Oracle, she steals (and modifies) one of Barbara's old Batgirl suits to help the team with some drug-induced riots. Although she is not seen, Batman recognizes Cassandra's style and tells Robin who it was that helped him. Unfortunately, part of this conversation obscures some of the Batmobile appearing in this issue.

Artist Rick Leonardi based the design on the coffin-nosed Cord (much like the first Batmobile), with a reshaped nose and more dramatic front fenders to create the silhouette of a bat when viewed from overhead. The rear fenders continue the bat theme, and the passengers' compartment has been streamlined into a "V"-shaped canopy blending into a smooth fastback roofline.