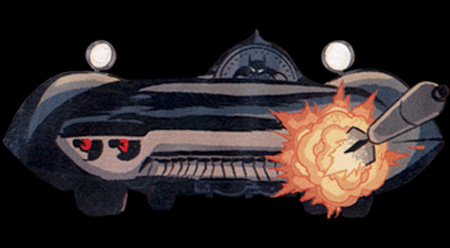 Justice League: The New Frontier is the second DC Universe animated original movie (after Superman: Doomsday), a series of films which take place outside of the regular DCAU. DC released this comic as a tie-in to that movie, which featured the story "New Frontier: The Lost Chapter." It tells the story of how Suprman was sent in to take out Batman. Batman had other plans, though.

Phase one of Batman's plan involved using this Batmobile to make a run at Superman. The car was a design that he had scrapped some time earlier, as it prooved too dangerous to perform reliably as a Batmobile. But Batman didn't need to use it for very long - he just needed something fast enough to stay ahead until phase two could begin. In that, the Batmobile came through flawlessly. The forward-mounted missiles kept Superman temporarily off-balance, while the rocket motor and oil dispenser were used to get Batman to the cave before Superman. The car met its end there, as the only way to stop it once it got going was to crash it into a wall.