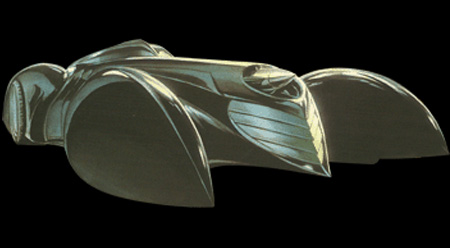 Known for his realistic style and elaborate panels, Alex Ross finally let fans see his interpretation of a Batmobile in December 2005's Justice #2. After the Riddler used a WayneTech computer to hack into the Bat Computer, Batman had to stop him before he could view or transmit the download. The chase began with Batman pursuing Riddler in the Batmobile, which had a distinct pre-WWII appearance. Featuring a highly sophisticated command/communications console, voice-recognition system, visual enhancement capabilities, signal jammer, and forward-mounted grappling hook, the Batmobile made short work of the Riddler's Land Rover, forcing the criminal to flee on foot.