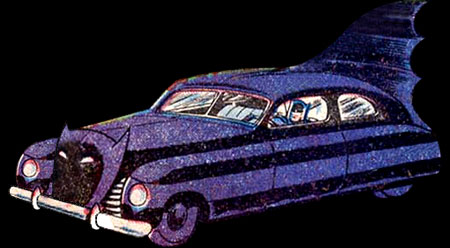 Dick Sprang updated his Batmobile design to reflect the postwar aesthetic starting in Detective Comics #142. The biggest change was the loss of the "fat fendered" look, creating smooth side panels that followed the design cues of cars like the Ford, Mercury, and (perhaps most strongly) Hudson. Opening the front wheels further reinforced this contemporary look.

This car's appearance in Detective #142 was brief, and it was always partially hidden behind other cars in the scene. Even so, we were able to catch a glimpse of a bat logo adorning the fin, something Sprang would immediately drop after this issue and not ressurect until years later. Unlike more modern logos, which were modified versions of the bat signal, this logo was a stylized version of Batman's cowl.

In addition to the usual features - supercharged engine, armored body, etc. - this Batmobile was shown to have a new ability. Thanks to a set of retractable props and a series of air tanks, this Batmobile could take to the water as first seen in Detective Comics #147.