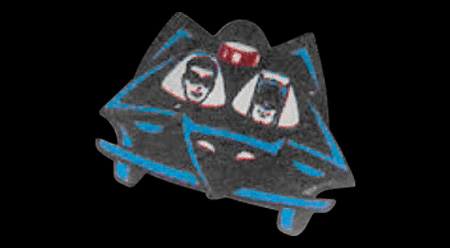 When the TV series Batman was in its first year, it was responsible for an incredible level of merchandising. Although most items were directly based on the TV series, there were a few things that were more "inspired by" than direct representations. One of the things included in that marketing juggernaught was a series of pins, including this Batmobile pin. Although it is clearly inspired by the TV series car, it also has several differences that make it a unique design, including flat-topped front fenders, a seperate bat-mask, and a traditional front bumper.