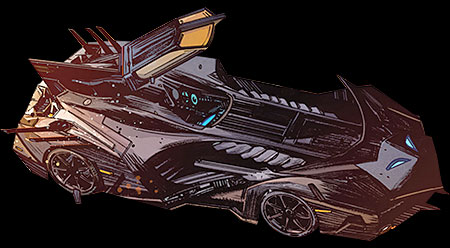 While most artists using Greg Capullo's design kept the Batmobile pretty much as he originally drew it, there were a few exceptions. The first was Tommy Lee Edwards' cover for Batman Eternal #35, depicting Batman escaping the Batmobile as it plunges out of a high rise. While the general look is the same as Capullo's, many of the details are callbacks to earlier designs such as the bat mask from Jim Lee's "Hush" Batmobile and the canopy from the Batman: The Animated Series Batmobile.