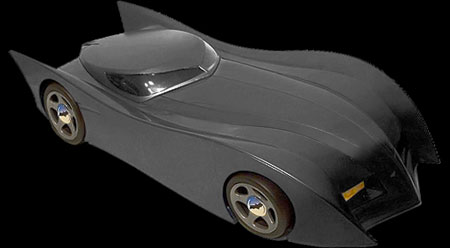 After Batman: The Animated Series finished it's run in 1995, the show was redone with some new characters (Tim Drake was now Robin, and Dick Grayson had gone on to become Nightwing), and a new style. This series was drawn with simpler lines and shapes, and overall more stylized than the earlier BTAS.

The Batmobile was also updated for the show, this time as a sleek two passenger coupe. Like the earlier cartoon, the only traditional Batmobile features it retained were the fins and split windshield. Like other Batmobiles, it also had jet thrusters, although they were now a pair of long, thin slits on the rear bumper.

Though The New Batman Adventures ended its TV run in 1999, this car design would be used throughout the comics based on the series, and was the car used in the later Justice League cartoon.

In 2005, this Batmobile was also heavily featured in The Batman Handbook, a complete guide for anyone curious about the real-world applications of Batman's training. Highlights from the book include a complete "How to Bulletproof your Batmobile," "Essential Extras for your Vigilante Vehicle" (including ceramic fractal armor, self-destruct mechanism, and grapnel placement), and driving techniques like how to drive on two wheels and how to jump a bridge.

Most recently, it was featured in "Batman Rebirth" being driven by Alfred temporarily disguised as Batman to distract the mad hero Gotham while the real Batman was en route. David Finch had used the BTAS car as inspiration for the Batmobile used three issues earlier, but this was essentially an unmodified use to the TNBA design. It is quickly destroyed in the ensuing fight, leading Duke Thomas to note that Batman may will eventually have to run out of Batmobiles.