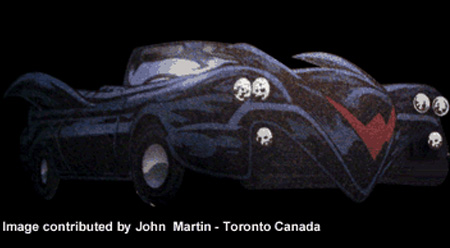 In issue #17 of the Teen Titans, the Titans are accidentally shunted 10 years into a future where Bruce Wayne is dead and Tim Drake has assumed the mantle of Batman. The future is quite different from what they expected, with their future selves being much darker (including a Batman is not above killing and routinely carries the gun that killed Bruce Wayne's parents in a shoulder holster concealed under his cape). This Batmobile isn't used during the story, but appears in the future Bat Cave.