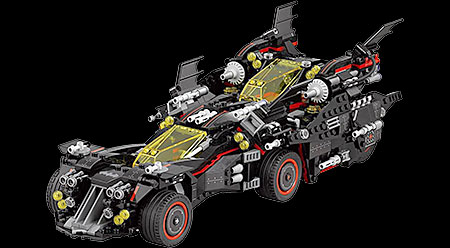 Once Batman learned his Very Important Lesson in The LEGO Batman Movie, he needed a way to get the whole Bat Family together in a way that his previous two-seater just didn't allow. Enter the Ultimate Batmobile, a rolling behemoth that incorporated a regular Batmobile (similar to the stand-alone car), a Batcyle for Robin, a Bat Tank for Alfred, and a Batwing for Batgirl. The four vehicles interconnected for transit, then separated to perform unique roles once in battle, the idea of a vehicle-within-a-vehicle calling back to several previous Batmobiles.