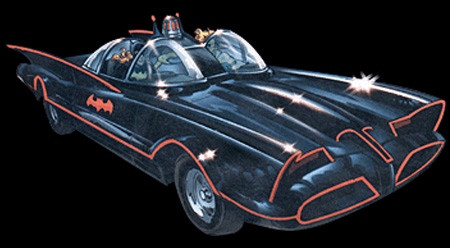 When Booster is charged with stopping a time-traveling villain, he travels into Batman's past. In Booster Gold #12, he and his sister steal this Batmobile to make a hasty exit from the Bat Cave. Although the front half of the car is essentially identical to the TV series Batmobile, the rear half is more like the comic book cars of the era.

Few specifics are given beyond its performance capabilities and bullet resistance, but Booster is thrilled for the opportunity to be behind the wheel of "the" Batmobile. Batman is less impressed with Booster's joyride, however, and simply "steals it back" after Booster had left it unattended.