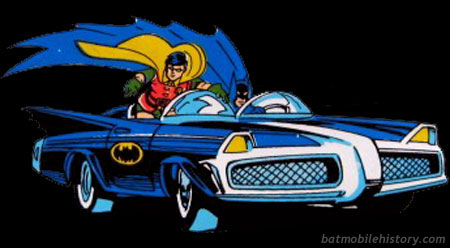 In the mid-1970s, most Batman merchandise was still based on the '60s TV series. This would change soon enough (once the Challenge of the Superfriends got underway), but until then there would be a few more variations of that design. One of those variations was used on a pencil case, and featured Batman driving the Batmobile with Robin preparing to leap into action. Unlike other Batmobiles that were based on the Futura design, this has a boxier look: the headlights and grilles are squared off, the nose has a more pronounced battering ram, and the fender openings have flat tops. The shorter windshields and chin spoiler also give it a lower, sportier look in an effort to update the design to fit the time period.