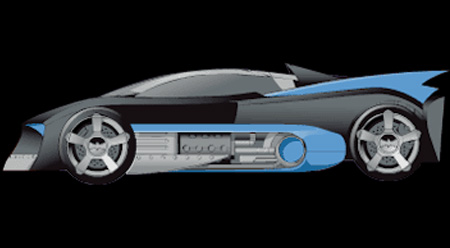 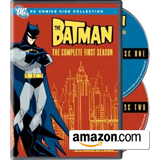 September 2004 saw the launch of a new animated Batman series, titled simply "The Batman." It was a new take on the Batman universe, with many of the characters reimagined and redesigned. Similarly, a new Batmobile appeared in the show and its associated comic book, The Batman Strikes.

Instead of the long, sweeping lines of other animated Batmobiles, this car is a very compact, powerful looking machine. Traditional Batmobile design cues are still present, however: the rear fenders include a pair of long fins, the tail of the car is designed around a series of jet exhausts, and the side coves bring to mind the design of the 1989 Batmobile. Like the Batman: The Animated Series Batmobile, the car uses a distinct internal-combustion sound effect, even when the jets are fully engaged. To aid in keeping Batman's true identity a secret, it was built with fully custom parts (including the tires) so as not to leave evidence that could be traced by police. Special features include a remote homing device and automatic driving feature, though its remote brakes occasionally needed a bit of tweaking. It is an extremely rugged car, and has shrugged off damage that would disable or destroy regular cars. It was damaged substantially in the movie Batman vs. Dracula, though not enough to put it out of commission permanently.

The car eventually met its end in the season 3 episode "RPM." Although it was able to keep up with Gearhead for a short time, a violent trip up a mountain road caused severe damage to the Batmobile, eventually ending with the car going over the edge of a cliff. The wreckage was retrieved by Batman, but it was far beyond any hope of repair. Instead, it was replaced by a new Batmobile, which has been used in the series since then. In keeping with the continuity of the show, this original Batmobile did make a cameo appearance in the season 4 episode "Riddler's Revenge," during a flashback sequence.