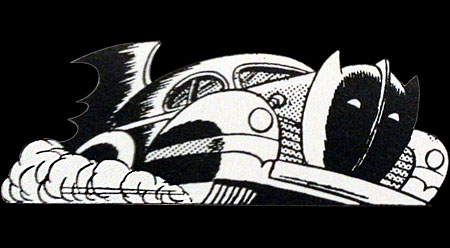 As Batman's popularity grew, the number and frequency of his appearances grew as well: first monthly comic books, then weekly serials, and finally daily newspaper comic strips. The design of this car was actually based on Dick Sprang's work, even though Sprang's Batmobile wouldn't appear to the general public until later that same year (thanks to a combination of the longer turnaround times needed for comics v. dailies, and the fact that DC had been inventorying much of Sprang's work for fear that their artists may get drafted).

Unlike Sprang's design, this BAtmobile sported a front bumper ahead of the bat mask, and the stripes were painted below the headlights. The fin is also somewhat sharper looking on Kane's version, with an almost perfectly horizontal edge with a "wrist" at the leading edge.