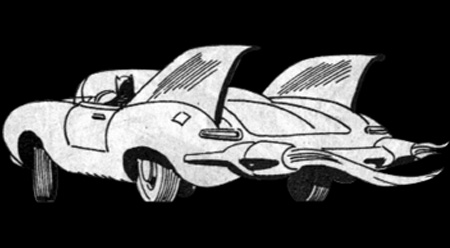 Two variations of the 1964 Batmobile appeared in The Brave and the Bold at the end of 1966/beginning of 1967. This first car appeared in "Alias the Bat-Hulk," and was based on the Jaguar XKE roadster. Among its myriad features are a TV hookup linked to Police headquarters, ejector seats, and an anti-booby-trap circuit. The car is destroyed at the end of act 1 when Batman fails to notice a trap set by the Joker and crashes the Batmobile into a pole (a trap that should've been hard to miss, since the Joker replaced the gear shift lever with a miniature talking version of his own head).