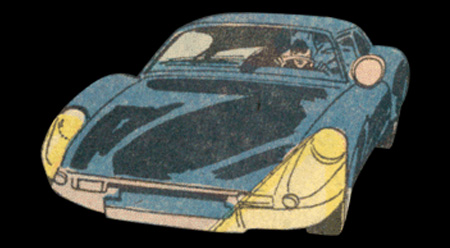 In Detective Comics #434, Batman faced off against The Spook for the first time. While investigating the escape of a mob boss (facilitated by the Spook), he comes across a pair of armed hoodlums in this Batmobile.

The overall design is heavily based on the Porsche 904 sports car, though it borrows from other sports cars of the time as well. Although it does have a Police-style spotlight mounted on the A pillar, the car is obviously not designed for other law-enforcement duties: after capturing the two criminals, the only way Batman has to secure them is to handcuff them to the steering column while sharing the passenger-side bucket seat. Batman apparently hadn't learned from his previous experience, as the car is stolen almost as soon as he steps out of it. The Spook later drops it off at the Police Impound Yard as a joke of sorts, complete with a stuffed dummy of himself sitting in the passenger's seat and handcuffed to the steering wheel. The car reappears in the next issue, including a brief stint underground as Batman tracks the Spook to his lair in an abandoned subway tunnel.