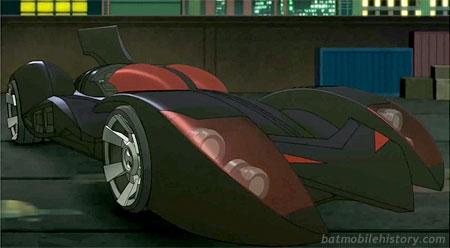 Son of Batman was based on the Batman and Son story arc by Grant Morrison and Andy Kubert that ran in Batman issues #655 - #658. It is the animated introduction of Damian, and how he learns to control his League of Assassins training and become the next Robin under Batman's watch

The Batmobile used in Son of Batman is strongly influenced by Art Lee's Brave and the Bold Batmobile, sharing many of the same design cues. This Batmobile is flatter and has more pronounced edges, making it look more aggressive. It also lacks the red stripes of the Brave and the Bold car, fitting more with the darker theme of the film.