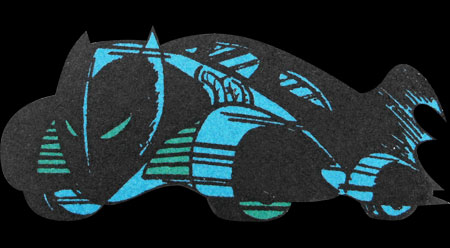 A few months after Bill Finger coined the term "Batmobile," artist Jerry Robinson drew what would be come the first definitive design of the car. The design was created nearly whole cloth, with only a passing resemblance to real cars of the time. The result was a combination of speed, style, and brute force that continues to influence Batmobile designs today.

As with the previous Batmobile, it features a supercharged engine capable of quick accelleration and sustained high speeds. Unlike that car, it has fender skirts to protect the tires and small windows and armored body panels to protect Batman & Robin. The bat motif has been changed from a small hood ornament to an overall theme: the body is now painted black (or dark blue) with a battering ram shaped like a bat head, scalloped fenders like the tail or feet of a bat, and a single fin on the roof like bat wings raised to the pinnacle of an upstroke. The headlights remain hidden on this design, and are never shown in the comic despite several night time driving scenes. It is possible that they have been located behind the grille, or that the bat eyes provide illumination.

Batman #5 also started another tradition: either Batman had a fleet of cars right from the start, or the Batmobile could be rebuilt fairly easily. When a high speed pursuit in the story "The Riddle of the Missing Card" goes bad, the Batmobile ends up going over the edge of a cliff. It reappears later in that same issue, in the story "The Case of the Honest Crook!" without a scratch on it.