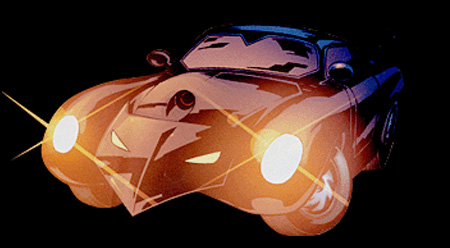 The "mean machine" Batmobile was destroyed during the earthquake that hit Gotham City in early 1999, and so once the events of No Man's Land were concluded Batman needed a new "standard" ride.

This Batmobile was a smaller, sleeker coupé with a set of fins, a single jet exhaust, and a forward-mounted bat mask. It was equipped with dense armor plating, self-sealing tires, on-board weapons & weapons-detection systems, a heads-up display, and a retractable roof. Later versions would also showcase a "stealth mode," where the fins, jet exhaust, and bat mask retracted into the body to make it appear to be an average sports car.

Due to its instant recognizability as a Batmobile and universal appeal, it has become one of the more enduring Batmobile designs of all time. Artists have continued to use it as the default look in comics and Batman merchandise more than a decade after its first appearance.