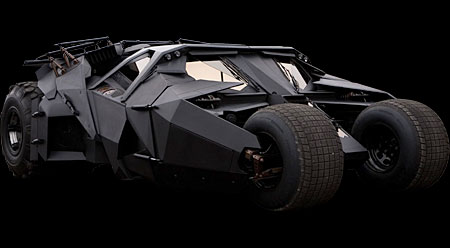 After an eight year hiatus, Batman returned to the big screen for Batman Begins. Rather than a sequel or prequel to the previous Warner Brothers movies, Begins was considered a restart, effectively starting the Batman movie universe from scratch. Among the new ideas to appear in this movie was an all-new Batmobile, designed by Crowley & Nolan and built by movie car engineers Chris Corbould and Andy Smith. Their primary focus was to make this Batmobile as real as possible: at 9 feet wide and 15 feet long, the car weighed in at 2.5 tons but was still capable of 0-60MPH in under six seconds with a top speed of 110MPH. Thanks to its unique design, it was also capable of making unassisted jumps up to 30 feet.

After years of training, Bruce Wayne returns to Gotham City ready to start cleaning out the criminal element. Recognizing that he needs materials to carry out his mission, he joined Lucius Fox in Wayne Enterprise's Applied Sciences division. Fox was placed in Applied Sciences as punishment, as the division was seen as a dead-end career track responsible for projects deemed too expensive or problematic for practical application. Bruce, on the other hand, saw the division as an opportunity to put these rejected projects to use as Batman. After reviewing the body armor, high-tension lines, and memory cloth, Bruce saw a set of tires poking out from under a tarp. Fox then introduced him to the "Tumbler," an experimental bridging vehicle that never quite made it. The concept of the vehicle was this: thanks to adjustable control surfaces and a jet engine, the Tumbler was capable of making rampless jumps to lay the basis for temporary bridges. The "bridge" part of the idea never panned out, so the whole project was scrapped and the prototype was mothballed.

Primary power for this Batmobile came from a 500-HP Chevy 350 V8 driving four 44" Super Swamper tires via titanium axles. The cabin had space for a driver and one passenger, with a unique arrangement for the driver: for normal driving situations, the driver simply sat in the left seat. In "attack" mode, the driver's seat moved to the center of the car, and the driver was repositioned to lay face-down with his head in the center section between the front wheels. This served two main purposes: first, it provided more substantial protection with the driver shielded by multiple layers of armor plating. Second, the prone position reduces the risk of injury a driver faces when making extreme driving maneuvers (stunt drivers are at risk of spine compression when doing jumps - laying down virtually eliminates this risk). In addition to performance and protection, this Batmobile was also capable of attack, with a pair of machine guns mounted in the nose of the car between the front wheels.

The Batmobile returned in The Dark Knight, with a few features that were not seen in Begins. First was a remote control system, allowing it to work separately from Batman. It was able to navigate basic routes, nonlethally fire its weapons, and generally draw attention away from Batman with preprogrammed routines such as "Loiter" and "Intimidate." Its armor plating was also given a more strenuous field test, as it had to run blockade against a garbage truck driven by one of Joker's henchmen. The Joker himself finally proved that even the Tumbler has its limits, firing a bazooka that ended up destroying the rear half of the vehicle. It still had one last card to play, though: much like the Batmissile mode from Batman Returns, the Tumbler had the ability to jettison the bulk of itself to provide a single-seat escape vehicle for Batman.

In this case, the resulting "Bat-Pod" was an open motorcycle-like vehicle formed by the front wheels and suspension. Power was generated by a pair of electric motors mounted in the wheels and synched via an onboard computer, and steering was accomplished with the rider's shoulders rather than hands (as the hands were protected behind a set of shields). The wheels were mounted on rotating frames, which created a more stable ride and allowed for more extreme maneuvers while keeping the rider upright. Unlike the Batmissile, the Bat-Pod was more than just an escape vehicle, and was armed with machine guns, cannons, and grappling hooks. Launching the Bat-Pod also initiated a self-destruct sequence in the remains of the Tumbler, ensuring that no one can reverse-engineer the technology or trace it back to its source.

Although it lacks the traditional fins or mask of a Batmobile, the Tumbler is not entirely without a "Bat" motif