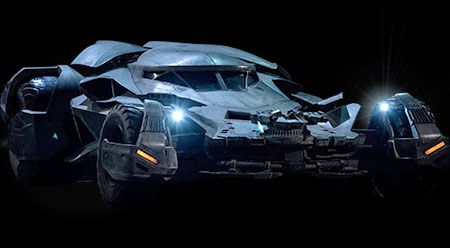 A Justice League movie has been rumored for years, and the success of Marvel's Avengers helped prompt DC to get things moving. But in this case, only one preexisting movie was used as a starting point: Zack Snyder's Man of Steel starring Henry Cavill. Christopher Nolan's trilogy remains self-contained, and Ben Affleck became the new Batman for 2016's Batman v. Superman: Dawn of Justice.

As with previous movies, a new Batman meant a new Batmobile. The car that debuted in BvS was a low, flat machine officially spec'ed at 20' (6m) long, 12' (3.7m) wide, and weighing in at 7,000 lbs (3,175kg). Unlike the Tumbler, this is not a repurposed bit of Wayne technology, but a specially-built machine to serve as Batman's ultimate ground vehicle (though individual bits of high-end Wayne tech have found their way into its design). It's primary weapon is a twin .50 caliber retractable machine gun turret, with other weapons including harpoons, spiked coils, chemical irritants, a charged surface, and sonic repellent. Additional weapons can also be fitted to the car on an as-needed basis. For defense, this Batmobile is fully armored with both passive and active anti-ballistics systems in addition to its stealth capabilities, electronic and physical countermeasures, smokescreen, and a scatter shield. Further enhancing its capabilities, it has night vision mode, sonar, toxin scan, and various surveillance options. To allow maximum flexibility in its duties, the suspension can be adjusted for street and off-road driving.

On creating the car, production designer Patrick Tatopoulos said his goal was to return the Batmobile to a "gothic, classic look." He wanted to bring back the long hood and flat canopy of Anton Furst's design, and give the car something similar to Batman's flowing cape. Director Zack Snyder suggested making the Batmobile look used and scarred, as a way of suggesting its long history before the events of Dawn of Justice. DoJ added a new scuff when the Batmobile sideswiped Superman, who subsequently tore off the canopies for a face-to-face with Batman. Despite the extensive damage, the Batmobile easily made it back to the cave and was rebuilt.

Later that same summer, it made a brief cameo in Suicide Squad as part of a flashback involving a chase between Batman, Joker, and Harley Quinn. This "earlier" Batmobile looked cleaner and lacked some of the weapons shown in BvS, most notably the twin forward guns.

It appeared again in 2017's Justice League, further modified to be used in the assault against Steppenwolf's stronghold. In addition to all the weapons shown in BvS, the forward guns were replaced with a pair of missile launchers and the right canopy was removed and replaced by a large cannon. The final addition was a sonic weapon developed after Batman witnessed a parademon in Gotham City being attracted to the sound of a police siren. This was used to draw the parademons away from the pther members of the League to give them a chance to get to Steppenwolf. The Batmobile was finally destroyed in the attack when one of the terraforming roots burst out of the ground underneath it and sent it tumbling over a cliff.

That was not to be this Batmobile's final appearnce, though. In 2021's Zack Snyder's Justice League, it recieved additional screen time including an expanded role in the assault. Gone was the sonic lure, but it did showcase a new off-road mode with a raised suspension and reconfigured wheel surrounds. It's final moments were also revised, with its flip being caused by a fireblast and its rollover ending by taking out a nest of parademons. 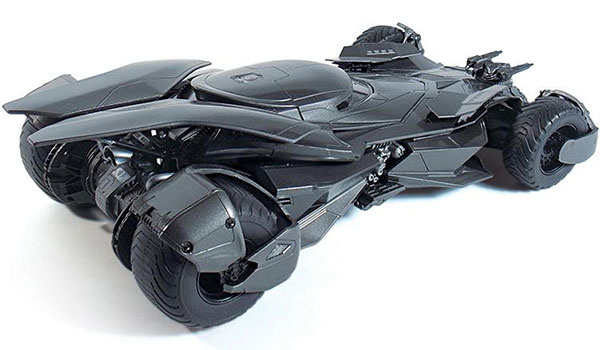