Legends of the
Dark Knight #204 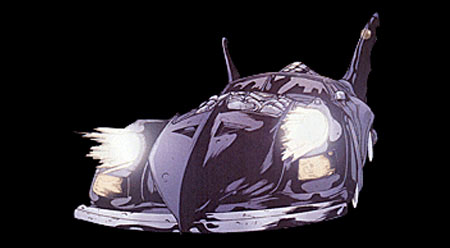 In the story "Madmen of Gotham," Batman used this powerful-looking Batmobile with a massive exposed engine. The design may be an homage of sorts to Batmobile #2 from The Batman. Though the car from the TV series has a smooth hood, the toy version has a large chrome engine visible. It's not an exact match, but both show a similar line of thought.

Aside from the massive engine, this Batmobile was shown to have a sophisticated on-board chemical analysis lab (capable of linking to the main computer back at the cave), safety foam and pepper gas launchers, remote driving capabilities, plus the now-standard two-way videoconferencing. The car is also shown to be heavily armored: even after Batman crashes the car through the front of a building (thanks to a massive and unexpected psychic attack), the car seems relatively unscathed and easily drives away.