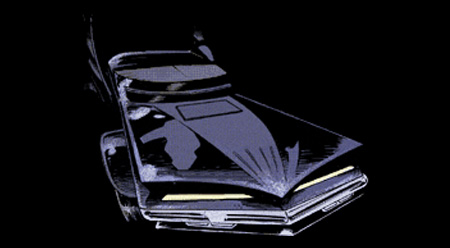 Another crossover comic occured in 1991, this time between Batman and the Predator. A new Batmobile is created for the story, and though it takes quite a beating at the hands of the Predator, it manages to save Batman's life more than once.

This Batmobile takes design cues from the muscle cars of the late 1960s, with an agressive, squared-off nose and sloped rear deck. The cockpit hood is designed much like the 1989 car, though instead of two windshields, this Batmobile has a single "armored car" style slot. It also features a voice-activated remote control system, and may be the first car to use the "home" feature to bring Batman back after he is too injured to drive himself.