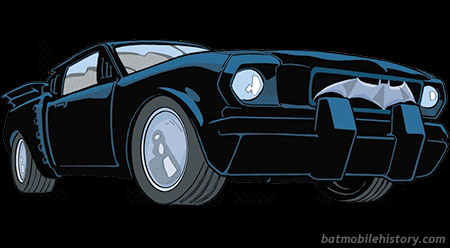 Batman: Overdrive is a young Bruce Wayne adventure, set when he was in his mid-teens and seeking vengeance for his parents' murder. A great deal of the story takes place in the garage at Wayne Manor, as Bruce seeks to restore his father's car with the help of new friends Mateo Diaz and Selina Kyle. The restoration project turns into a custom effort, as the trio (with a little behind-the-scenes help from Alfred) builds the first Batmobile.

The car is drawn as a '66 Mustang fastback, here called the "Crusader." Aside from the obvious "Caped Crusader" reference, all of the cars in this story use alternative names - a Porche 911 is a "Lynx 360," a Lamborghini Urus is a "Vazzoler," and an AC Cobra is simply called "the Roadster."

Among the myraid features mentioned in the story, the Crusader has been equipped with improved aerodynamics, secret compartments, a voice-activated communication and control interface, high-performance tires, vertical boosters, EMP bugs, a front-mounted towline with grappling hook, and arrow launchers behind the headlights.