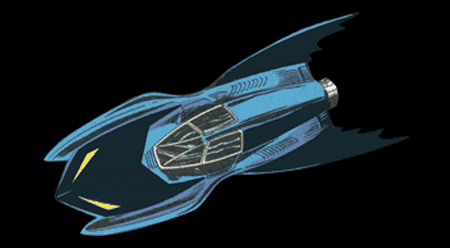 In the summer of 1993, DC did a multi-comic crossover titled Bloodlines. In the story, five parasitic alien shapeshifters (the last of their species, after Lobo destroyed the sixth of their number) are killing humans. In Batman Annual #17, Jean Paul Valley has his first "monster encounter" as Batman, and quickly realizes that he is no match for the creature alone. He warns the GCPD to avoid the creature, but they ignore his advice and nine officers are killed. A tenth officer is also attacked, but instead of being killed he mutates into a new creature (Ballistic). He and Batman team up to confront the monster.

Before the team-up, Batman is shown using this Batmobile. It features a Speed Racer-inspired nose and profile, combined with an angular aircraft style canopy. Only two gadgets are specifically shown; a driver-side ejector seat and autonomous driving system. Although it is never seen again, the Batmobile does survive the issue: Batman and Ballistic use a stolen Humvee for their final confrontation.