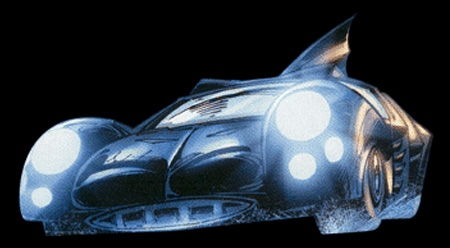 In 2005, Frank Miller once again wrote his own version of the Dark Knight. This time, he is paired with artist Jim Lee for a retelling of Batman's recruitment of Robin (in events likely to lead into The Dark Knight Returns and The Dark Knight Strikes Again).

This Batmobile first appeared at the end of issue #1, obliterating a GCPD car while arriving to pick up the future Robin. Issue #2 took place almost entirely in the car, with Batman explaining how the world "really was" to Dick. After a violent police chase, Batman, Robin, & the Batmobile took to the skies with a conversion mode similar to the one seen in DKSA. Then, in issue #3, a submarine mode was introduced, allowing the Bamobile to travel effortlessly underwater.

Back to Main Page | Next Batmobile