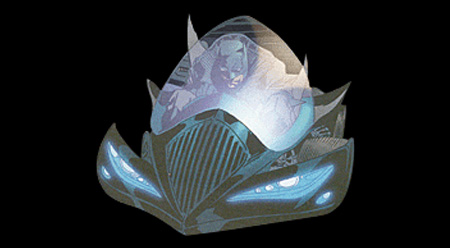 For Batman issue #666, writer Grant Morrison moved the story 15 years into the future. In it, the world has decended into chaos and Bruce has been killed in the line of duty. Taking his place as Batman is his son Damian. Barbara Gordon, the new Police Commissioner, doesn't approve of the new Batman and has no reservations about bringing him down. As her officers move in near the beginning of the story, Damian escapes on this scaled-down Batmobile. Although its size and design seem more like a Batcycle than a Batmobile, it easily serves its duty as a high-speed transport. As he speeds away, dodging under a semi truck, Barbara calls off her men by stating, "they'll never catch his Batmobile.".