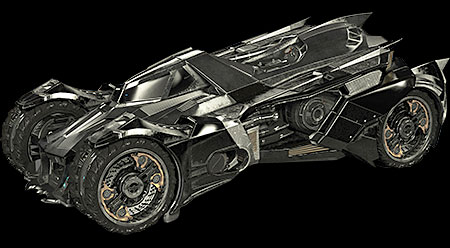 The fourth entry in the Batman: Arkham series was released on June 23, 2015 for PlayStation 4, Xbox One, and Microsoft Windows. The game is set one year after the events of Arkham City, when Scarecrow launches a city-wide attack on Gotham. With the previous Batmobile having been crushed during the destruction of the Asylum, Batman needed a new ride.

Designed and built by German automaker Zimmer and smuggled into Batman's arsenal (much like Earl Cooper created the Batmobile for Batman: The Animated Series), this new Batmobile is substantially upgraded. Powered by a 1,200 bhp WayneTech hybrid power cell with jet turbine, it has a top speed of 209mph (without afterburner) and can accelerate from 0-60mph in less than 3 seconds. The nitro methane-fueled afterburner increases its top speed by 30%. A set of 4'7" (1.4m) synthetic compsite all-terrain tires and massive air brakes help keep all that power under control, and a 60m winch mounted in the nose for any worst-case driving scenario. It also features 120mm carbon nanotube aggregate armor plating capable of withstanding 10 tons per square inch of force, plus reactive armor around the cockpit. Because the new Batmobile is a single seater, a three-seat containment unit has been fitted in the rear.

To go with the performance upgrades, this Batmobile also features a host of systems upgrades as well. Among these are enhanced intel and recon capabilities, AI and remote guidance systems, and an EMP generator. It also has the ability to switch from "Pursuit Mode" to "Battle Mode," giving it a wider, more stable footprint and increased maneuverability thanks to individually articulated wheels with 360° of lateral spin. To further enhance the Batmobile's battle-readiness, it has been built with an array of weaponry. These include a 25mm Vulcan gun, 60mm cannon with explosive penetrative shells, nonlethal "Slam Rounds" (a flexible plastic casing filled with 50g rubber pellets), 300,000v electroshock countermeasures on all four fender tips, and 50gm high explosive cl-20/hmx cocrystal Immobilizer Missiles with laser and infrared guidance.

Most recently, the car made a brief appearance in March 2018's Batman #39, as the background of a splash page showing Batman suited up before going into battle. 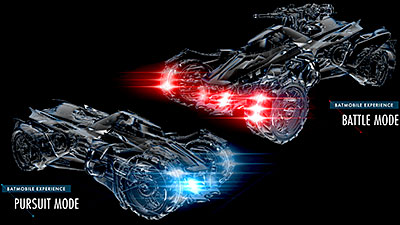