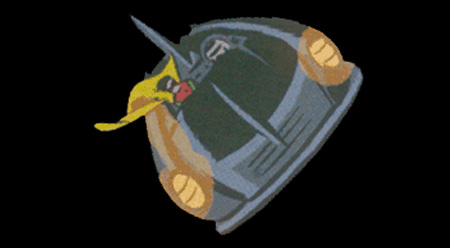 The January 2007 comic Batman/The Spirit provided an introduction between the Dark Knight and Will Eisner's famous character. The story takes them both to Hawaii, where the American Criminologist Association is holding their annual convention and a group of criminals is planning to use the opportunity to their advantage.

This open-top Batmobile appeared near the beginning of the story, as Batman & Robin attempted to catch a plane full of Batman's rogues on their way to the convention. The car launches a grapple that connects with the plane, and is sent airborne until Batman is knocked out of the plane and tells Robin to release the cable. The Batmobile plunges to the ground, making the criminals think that Batman & Robin had perished with it.