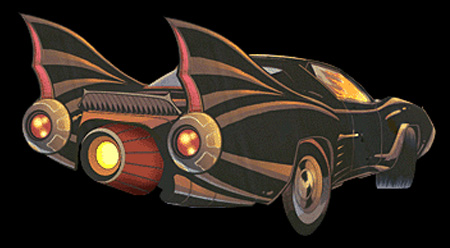 The Superman/Batman story "Vengeance" starts off literally in the heat of battle, with Batman arriving at the scene of Atomic Skull's latest crime. After intercepting Skull, the Batmobile launches a towline from the rear fender, bringing Skull's bike to a crashing stop. Despite Batman exiting the car to finish the fight hand-to-hand, this Batmobile doesn't last much longer once Superman arrives on the scene: the Skull uses the Batmobile as a piledriver, quickly ending its brief but intense career.