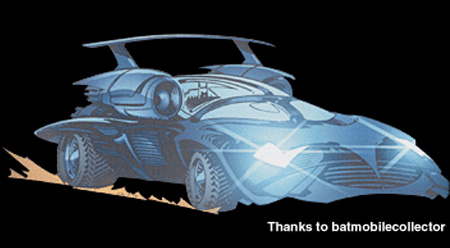 After Hitman finished its run in 2001, writer Garth Ennis said that there was at least one more story left to tell. He and John McCrea were able to follow through with that idea in 2007's JLA/Hitman, a tale chronicling Tommy Monaghan's first meeting with the Justice League. The story is told in flashback, and puts the events just after the mid-point of Hitman's original run (sometime between issues #34 and #39).

Tommy is recruited by Batman in response to another attack of the alien contagion that first appeared in 1993's Annual crossover series "Bloodlines." Batman reasoned that Tommy, being one of the few remaining survivors of that attack, could provide a clue as to how to deal with the new threat. At the same time, Tommy has been on Batman's list for quite a while: after the alien threat is eliminated, Batman will already have him in custody to turn over to the GCPD.

Batman makes good on his promise, and after handing Tommy over to the police drives away in this Batmobile (it only appears for one panel, so no details about the car are given). Fortunately for Tommy, the officers that pick him up from Batman have no interest in bringing him in, and instead drop him off at the local bar.