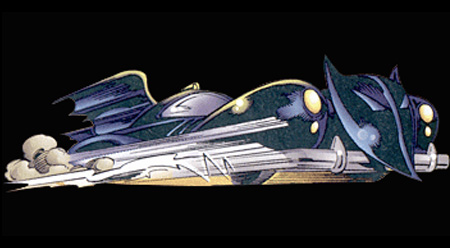 Batman & Spider-Man teamed up for the first time in 1995'a Disordered Minds. When behavioral psychologist Cassandra Briar demonstrates a new implant that is supposed to cure the "irredeemable psychopaths"—men like Cletus Kasady (Carnage) and Joker—things don't go according to plan and the two heroes must team up to stop Carnae and Joker from destroying Gotham.

Batman at first rejects his assistance, but soon realizes that Spider-Man's intimate knowledge of the villian would make catching him much easier. Batman picks up Spider-Man in the above Batmobile, a design based on the car used in The Killing Joke. The design here has been exaggerated with longer, sweeping fenders, smaller fins on the two rear fenders, and a partial roof like the 1950 Batmobile. Little of the car is shown, though it does have an onboard tracking system capable of detecting the frequency used by Briar's failed implants.