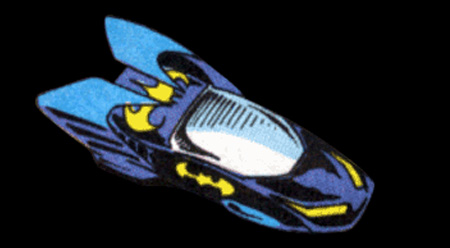 In the summer of 1993, DC did a multi-comic crossover titled Bloodlines. In the story, five parasitic alien shapeshifters (the last of their species, after Lobo destroyed the sixth of their number) are killing humans. In Detective Comics Annual #6, Batman faces more of the alien shapeshifters.

The beginnings of Jean Paul Valley's modifications to the bat suit had started taking effect by this point, and the Batmobile refleced the new "Azbat" styling as well. It was now more aggressive looking, with the nacelles over the rear fenders moved to the sides of the car, and the flared exhaust ports now a pair of enoromous wings that folded up and over the car. The outrigger wheels used during the period were still present on this car, but less pronounced. This style Batmobile would continue to evolve as Valley became less "Batman" and more "Azrael."