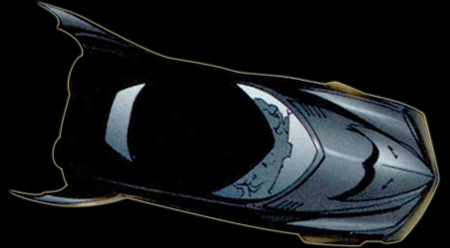 Blackest Night: Batman brings the Blackest Night series to Gotham, where the dead have been rising from their graves - including the families of Dick and Tim. When Deadman seeks out Batman, he finds Dick in the Batsuit driving the above Batmobile. The combination of surprise on Deadman/Dick's part and Damian's unfamiliarity with how Deadman inhabits people causes the car to go through a guardrail and into a field. Fortunately, the car handles the brief time off-road with no ill effects, and Deadman jumps over to Damian so he can catch up with recent happenings while Dick drives to the nearest cemetary.

The car is a relatively simple coupe, with the standard bat mask and rear fender fins. it appears to be an updated (and streamlined) combination of the car from Hush and the Batmobile that appeared after the "1 Year Later" jump.