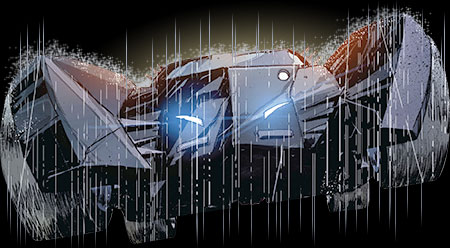 In "The List," the final Batman issue of "The New 52," Batman gives chase to a high-tech (but small-time) thief who has stolen a safe deposit box containing the "How to Move On" notebook Bruce started shortly after his parents were murdered. Though the item isn't particularly valuable financially, it's personal nature made Batman's pursuit that much more intense.

Part of the chase is spent atop this Batmobile, which is loosely based on Greg Capullo's design but rendered with more typical "street car" proportions. Unlike many recent Batmobiles, this seems to have no voice command system. Instead, Alfred controls the car remotely from the cave when Batman is not in the driver's seat.