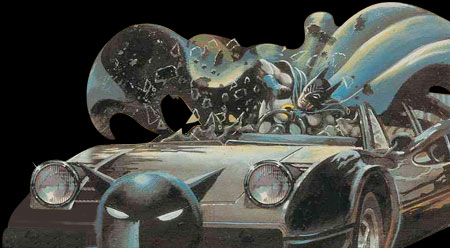 Two versions of Batman vs. Predator were released in 1991: a standard version (priced at $1.95/issue), and a prestige version (priced at $4.95/issue). The prestige version came with a set of sixteen trading cards and painted covers by Arthur Suydam. The cover to the third chapter featured the above Batmobile, with its roof being torn off by the Predator. The base Ferrari 308 has been modified into a Batmobile with the addition of a forward-mounted bat mask and roof lights (two amber fog lamps flanking a bat beacon).