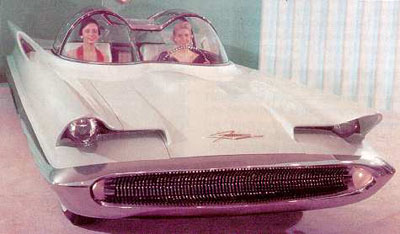 Claim: The Lincoln Futura had a Fiberglass body.

Origin: This myth is based primarily on one very vocal eBay user who, in late January 2007, posted an auction for a 1/64 Hot Wheels Batmobile that contained a plethora of misinformation. One of the more strongly-held beliefs presented was that the Futura was a fiberglass-bodied car. Simply put, it isn't: the Futura has a steel body.

The confusion on this point likely comes from two places. First, the Barris-built Batmobile replicas were indeed fiberglass, as are most fan-made replicas. The #1, however, is a steel-bodied car that weighs in at over two and one-half tons. The second (and harder to describe) point of confusion seems to stem from a note about how the original Futura was prepped:

"A special experimental Lincoln chassis and full size plaster body casts were built and sent to the Ghia Body Works at Turin, Italy, along with complete blueprints and detailed specifications." (source: 1966Batmobile.com)

The eBay user went on to say & emphasize, "Plaster cast body which was renamed later as fiberglass not metal." This, however, is not the case. "Plaster" is a term that has been around for hundreds of years, while "fiberglass" has been around since the late 1930s - both well before the Futura was conceived or built. Corvettes had been using fiberglass bodies (and calling them such) for two years by that point, so auto manufacturers had a pretty good hold on what fiberglass was and what plaster was. No name changes would be required in the future. The confusion likely comes from a simple word switch: "plaster body cast" was read as "plaster cast body," and a back-story to fill in the gaps was invented to go with it.