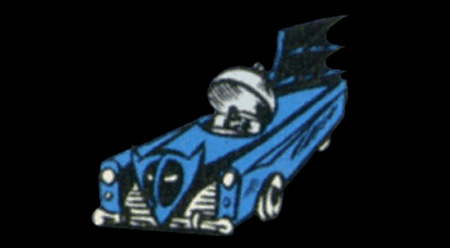 Though very similar in design to the 1950 car, the progression of the 1950s saw the Batmobile change again for the sake artistic simplicity; hence, the "bubble dome" Batmobile was created.

It retains many of the features of the previous car, with the major exception being the now seperate dome over the passenger compartment. The car has also lost many of the curves of the previous car, being essentially a very long, thin box with the dome, fin, and "bat nose" features added. The on-board laboratory was lost, leaving only a two-passenger compartment under the dome. Many Batmobile fans dislike the overly simplified lines of this car, which would last until the next redesign came in the early 1960s.